Who should read this book: WW2 and post WW2 historical fiction fans, anyone that read The Alice Network and liked it 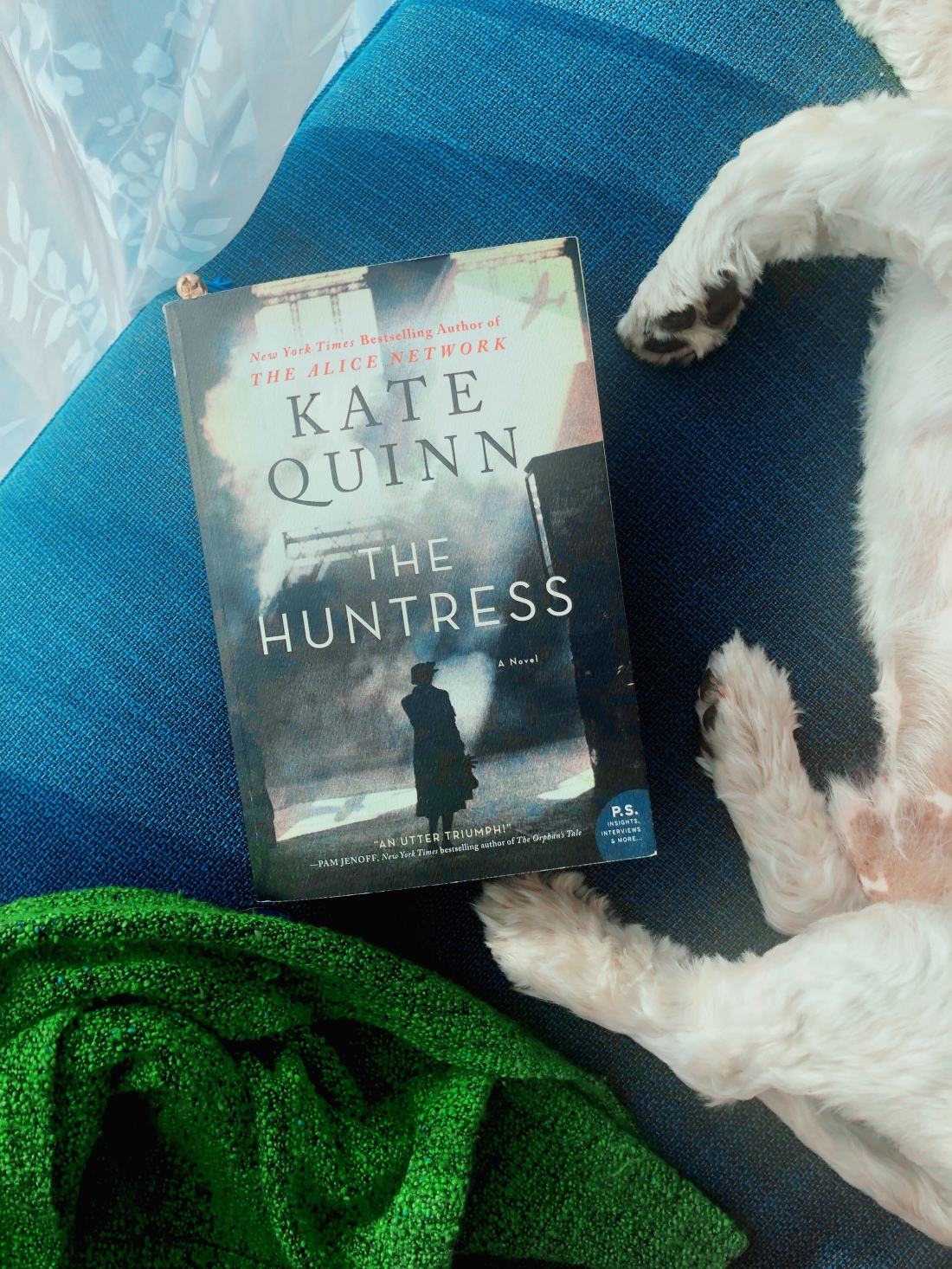 Okay ladies and gentlemen, I want to give a big congratulations to Kate Quinn for becoming an auto-buy author for me!! *clap clap clap* I’ve loved both of her books now and eagerly anticipate the next one.

The Huntress follows a few timelines. We’ve got Jordan, whose widowed father meets a nice Austrian woman just after the war, but Jordan is a little suspicious of her. Then you’ve got Ian and Tony, a Brit and American respectively, who work as a team hunting down WW2 criminals that escaped justice. They are on the trail of The Huntress, a woman that killed 6 Polish children, Ian’s younger brother Seb who was a POW and potentially more. She disappeared after the war and they don’t know her real name… The third timeline is Nina’s, a Russian bomber pilot and all around badass that was the only one to escape the clutches of The Huntress. As Ian and Tony close in on The Huntress, Nina arrives to help them… and they end up in America.

This is your classic cat and mouse style chase. The story jumps between each of the timelines, slowly bringing the past and present together in the chase, giving the reader clues all the way through. The book dragged a little bit in the middle. As soon as I figured out what was going on, I was getting a little impatient for the characters to figure it out. But it was still a wonderful read, I think even better than The Alice Network. Also there was a tiny call back to The Alice Network suggesting that these books existed in the same universe. Which I loved. Overall a wonderful book.

Writing – 2/2: Kate Quinn struck me again with her powerful prose. She can write such wonderful and deep characters. In The Alice Network, I tacked on to Eve hard, because I love a badass female main. In this one it was Nina that sucked me in. As soon as she was introduced and we slowly started to learn her back story, that’s all I wanted. She came from a backwoods Siberian village to became a bomber pilot for the Red Army at a time when women were not treated equally. (coughs* that’s still the case). Her story is so amazing and I was routing for her the whole time. Also she’s a little crazy which I think drew me to her even more.

Historical Accuracy – 2/2: It was really well done. A lot of the characters are based on real people. I read the notes from the author at the back and Nina’s character was built from studying the female pilots in the Red Army. Quinn took a bunch of different women’s stories and brought them together to make Nina. Also Ian and Tony are based on real people as well as The Huntress! This book was well researched and I had no issues with it.

Plot – 1/2: I’m sorry Kate Quinn! The story was great I just wanted more about the Huntress. I was a little lost on her being a villain. I think if her story had been developed a little more, I would have been more interested in her getting caught, which was the main story line. I still thoroughly enjoyed the book, I just wanted more about the Huntress.

Hook – 2/2: The story line starting with Jordan meeting her dad’s new girlfriend was very intriguing. It’s made clear pretty quickly that there’s something not right about her but only Jordan can see it and not her father. The photograph that Jordan takes of her soon-to-be stepmother is what hooked me. Anna seems so kind and lovely but in a photograph, a quick candid, taken by Jordan, she looks dangerous. That’s when Jordan becomes suspicious. Then you are introduced to Ian and Tony, the ones hunting The Huntress and you as the reader immediately make the connection. Then you just watch it unfold.

Feel – 2/2: I flew through this book and that’s always a good sign for me. I really enjoyed this one, especially the last 150 pages which were full of suspense. Quinn weaves a good mystery and builds amazing characters. I can’t wait for her next book.

One thought on “Nina and The Huntress”